“The Soderfjord Jarldoms are a useful buffer state between Ostland and us. Moreover, should the Jarldoms fall in the hands of King Hord, our trade routes to the north would be crippled. Sure, we could still use Sardal Pass Road, but the wise would rather have two strings for his bow, than risk to be left with no strings at all.” Yasir al Najid, tutor of Selim, nephew of the Malik of Sulba

Ruler: The Nordharter Defense League
Government: Alliance of petty monarchs
Capital: Soderfjord
Languages: Heldannic
View map
Rumors, Lore and Places of Interest:
The Nordharter Defense League meets twice a year in Soderfjord to appoint or confirm a war leader, who is in charge of defense of Soderfjord from outside threats.
The Sodervirk is a defensive wall currently being constructed in cooperation of the local jarls and dominions.
The Ostfold Scarp is a spectacular series of 300 to 500 foot cliffs overlooking the ocean where the Gnollheim Hills and the Hardanger Mountain Range meet the open sea.

The Land
Soderfjord’s territory is not terribly suited for settling. It is composed of a large coastal plateau, broken by the valleys of the Saltfjord and Otofjord rivers. The plateau is covered by patches of wood and grasslands, and is the best farmland of the country. The river valleys are densely populated, and the towns of Soderfjord and Backwater are built there. Two other regions are settled; the northern border with Vestland, and the southern mountain town of Castellan which also serves as a trade post on the route to Cinsa-Men-Noo in the Emirates of Ylaruam.

Mountain and hill ranges unsettled by humans compose the western and southern borders of Soderfjord. Nomadic gnoll herders inhabit the Gnollheim Hills, and the Hardanger Mountain Range is home to kobold clans. These regions, while considered part of the Jarldoms, are not controlled by the Soderfjord clans.

At the centre of the nation lies a vast marsh, dotted by small areas of fertile land. Few settlers live in the Great Marsh, mostly guardsmen in the fortified shelters that serve the Marsh Road to Castellan. The Marsh Road is part of a trade route that cuts through the nation from north to south, bringing caravans from Vestland to the Jotunvalk Pass, which signals the border with the Emirates of Ylaruam.

History:
For the past three centuries this region has been divided into a number of minor nations, each ruled by a powerful clan. From time to time, one jarl would overrun several neighboring territories and proclaim himself king. The other jarls would then get together and thoroughly trounce the upstart.

At the Council of Soderfjord in 950 AC, representatives of the most powerful clans signed the Treaty of Allied Dominions, forming the Nordharter Defense League. This action was seen as necessary to prevent the region from eventually being overtaken by Ostland or Thyatis. All who signed, and their descendants, are sworn to answer the summons of the “war leader,” who is chosen by a Council of the Great Jarls. This treaty provides for the mutual defense of all the dominions held by those who signed the treaty.

History
Soderfjord existence as a nation dates back only to AC 950, when the Nordhartar Defence League was formed through the Treaty of Allied Dominions signed by the most powerful jarls of the region. Before that time, the Soderfjord jarls constantly waged war on each other, but every time one of them looked powerful enough to establish himself as a King, his rivals would band together to overthrow to upstart monarch. Frequent Ostland raids only made things worse.

After the formation of the League, treaties were signed with both Vestland and the Emirates of Ylaruam, which were interested in securing the Overland Trade Route and in avoiding any attempt by the Kingdom of Ostland to conquer Soderfjord. As the Kings of Ostland turned to The Thyatian Empire for help, a stalemate was reached, which has allowed the League to survive up to this day, despite the widespread infighting among the powerful jarls.

The People
The people of Soderfjord uphold the values on independence and self-reliance, and the democratic tradition of the thing, the legislative assembly of all freemen.

The society has formally only two classes, the jarls and the freemen, since slavery is illegal, and the merchant class is not nearly as developed as in neighbouring Kingdom of Vestland. However, jarls are the only law in their own domains, so there are some regions where freemen are actually kept in servitude by the local jarl.

The towns of Castellan and Soderfjord stand out as exceptions to the common population mix of the Jarldoms. The latter is a port full of those shady characters common in the southern lands, but rare in the Northlands, and houses the only large, permanent military force of the Jarldoms, Ragnar’s Brigade, quartered in Ragnar’s Fort, the residence of the current war leader of the Nordhartar Defence League.

Castellan has a large share of foreigners among its residents, including a dwarven quarter, and a number of Ylari merchants. A fairly large native merchant class has grown here, and the influx of money due to the presence of the Overland Trade Route has sped the transformation of the town, which now sports a stone fort of dwarven making, and many more stone buildings than the rest of Soderfjord’s towns.

Other than humans and dwarves, the only inhabitants of the region are hostile humanoid tribes. These include mostly gnolls and kobolds, but also frost giants and the mysterious moulder dwarves.

Government and Religion
Soderfjord’s rulership is divided among the Council of the Great Jarls and the war leader, currently Ragnar the Stout, the jarl of the Soderfjord clan. The Council meets twice a year, and has the power to issue laws and policies, and to select the war leader, who is responsible for defence, but has no other powers. Even though the Council can make laws, it cannot enforce them, since within a dominion the local clan leader or jarl is the only authority, and it is actually illegal for anyone else to police the domain, even if the jarl does not apply the Council’s laws.

The people of Soderfjord mainly worship Frey and Freyja, though jarls and warriors honour Odin and Thor instead. The worship of Loki is widely tolerated, and even followers of Hel can allow themselves to relax their secrecy standards, if they are powerful enough, since the central government is too weak to enforce the ban on these cultists.

(from the Mystara Newbie Guide)

Area (in square kilometers) and Population from the Italian Demography project 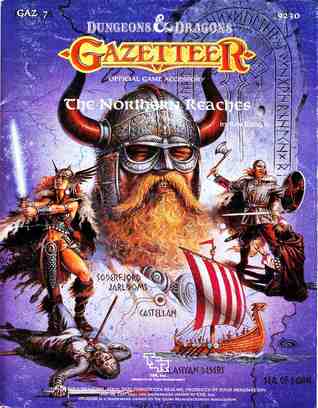