The Lands of the Shadow Elves

“I’m delighted that you’ve taken an interest in our local folklore. The Shadow Elves are indeed an interesting tale – cursed elves, banished underground during the Great Rain of Fire, who will return to destroy us all. It’s the sort of thing that elven mothers tell their children when they want them to behave, and nothing to worry yourself over. I’m sure the attack on your men was mere bandits, probably of Clan Feadil. They dislike outsiders, you know. More wine?” – Counsellor Carlisan of Clan Chossum, Alfheim, speaking with a Darokin merchant friend

Far beneath the Broken Lands, in the tunnels where even the humanoids fear to venture, are the lands of the mythic Shadow Elves. Pale and xenophobic, their lands actually cover networks of tunnels directly underneath the Kingdom of Alfheim itself, and running as far as the Principalities of Glantri and the Republic of Darokin. These tunnels are miles beneath the surface, and few outsiders ever set eye on them, none have returned to tell the tale.
The shadow elves make their homes in large caverns, where they have constructed entire towns and cities. There are four major cities, each one belonging to a different clan. The largest of these is the City of the Stars, home to the shamans and the King. Although shadow elf holdings are spacious, they are by no means safe. Humanoids above and strange monsters below hedge in the elves. Sinkholes, cave-ins, magma flows, underground rivers, fungus forests, and even weather patterns (in the larger of the caves, which are often the size of feudal dominions) can all prove hazardous. Life in this land is hard, and its inhabitants have become hard as a result. Other cities are: Alfmyr, Losetrel and New Grunland.

Things weren’t always like this. Long ago, the shadow elves dwelt on the surface, and enjoyed bright sunlight and prosperous living. Then came the Great Rain of Fire, a cataclysm that forced the four clans underground. They wandered for a long time, eventually coming to a huge cavern. There they found, carved in stone, the 14 verses of the Way of Rafiel. They settled in the cavern, proclaimed a new king, and took Rafiel as their new Immortal.
Occasionally, the shadow elves sent expeditions up to the surface. These parties always arrived in the Broken Lands and, seeing the desolation, concluded that the surface was still uninhabitable. Millennia passed this way. Then, almost 800 years ago, they stumbled on a group of humans from above and learned that the surface had been safe for several centuries. Worse, they learned that there was an entire nation of elves above, who had apparently forgotten their unfortunate cousins.

The shadow elves, now quite numerous, sent a diplomatic party to the elves of Alfheim. Unfortunately, the surface elves cared nothing for the hardships of their kin, and the shadow elves were banished back into the caverns. Saddened and angered, the shadow elves swore to drive out these treacherous elves and reclaim their rightful homeland. Two subsequent invasions failed, so the shadow elves have adopted a new tactic – that of infiltration. They are slowly placing the pieces for their next invasion, and soon hope to regain their ancestral lands.

It should be stressed that the shadow elves are not evil per se. True, they hate the surface elves, as well as dwarves and humanoids and almost any outsiders. They have traditions that may seem savage when viewed from the outside. Within their own society, however, the shadow elves are honourable and supportive of each other. Crime is practically unknown, and for one shadow elf to betray another would be a sin worthy of the worst surface dweller.
Due to their time spent underground, the shadow elves are white-haired and pale of complexion. Their eyesight is keener than that of normal elves, and they can see quite well in complete darkness. However, they are unable to stand bright light, especially sunlight.

There are four clans of shadow elves – the Celebryl, the largest clan; the Porador, who are the main farmers of fungus, slugs, and giant bat mounts; the Felestyr, who mine the magical soul crystals; and the Gelbalf, who are craftsmen especially suited in harvesting spider silk cloth. A vigorous trade exists between these cities, but there is little to no exchange with the surface world. Overall, shadow elves are hard working, devout and peaceful. If however they are threatened or crossed, then their anger is quick and merciless.

Government and Religion
Temple of Rafiel
King Telemon of clan Celebryl currently rules the shadow elves. His daughter Tanadaleyo is an accomplished warrior, and both are well loved by the people. However, the Radiant Shaman Porphyriel, high priestess of Rafiel, holds a great deal of political power. Shadow elf life revolves around the worship of Rafiel, who is considered to be their saviour when they were lost underground. The Way of Rafiel dictates the proper food and clothing, the times to plant, hunt, and harvest, and even the destiny of children at birth. Rafiel marks his chosen children in the womb, and those that he wishes as shamans bear special facial markings. When one of these children is born it is considered a great honour, and the child is taken to the temple to be raised. The balance of these gifts, though, is that some children are born crippled and deformed, and Rafiel demands that these be abandoned in caverns far from home, and he promises to take them up to himself. 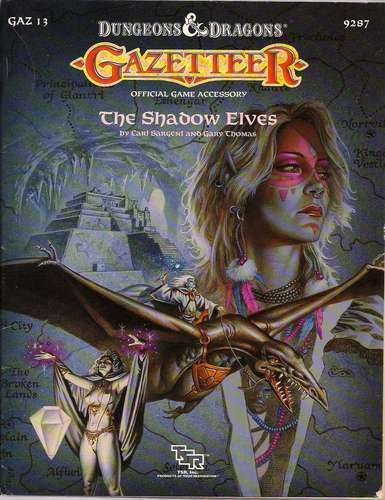