General Overview
The Radlebb Woods are home to the Clan Callari elves. Although they live throughout the woods in many traditionally elven villages, they have built a ‘capital’ to act as their ‘interface’ with the humans of the Kingdom of Karameikos. Mixing with humans, whether Traldar, Thyatian or Karameikan, has had little effect on the elves, who in many ways rule their lands as an independent feifdom.
Population:Rifllian is a small Elven village of nearly 200 inhabitants on the western bank of the Windrush River. The village is an outpost for the Callarii Elves and serves as a trading post for those wishing to do business with the Callarii, or simply as a stopping place for travelers.
Rifllian is situated on the banks of the Windrush River. A ferry provides a route across the river, and a trail leads through the hills to the Gnomish/Dwarven city of Highforge. The woods surrounding Rifllian are home to many Callarii elves, and the area can be considered relitavly safe.

Accommodations
The only inn that will serve non-elves is The Silver Swan.

Special Interest
Rifllian is the only location for outsiders to safely make unsolicited contact with the Callarii. The Elves of the village are all accustomed to dealing with strangers and are kindly disposed toward humans. Also of note is the Elves fondness for horses. A horse-trader with fine mounts can expect to receive a warm welcome in the area. Any transaction larger than 500r, however, must be handled through Prestelle (!), the towne-master. Prestelle has a well-deserved reputation for driving a hard-bargain yet she is said to always be fair.

The village contains a mixture of traditional elven tree-dwellings and more normal buildings on the ground. The village centre is simply a series of clearings around the Duke’s Road in which can be found an inn (the Silver Swan), the Trading Post, where much of the trade between the elves and Karameikan merchants takes place, and a Guard Post where a small contingent of the Elvenguard is housed. 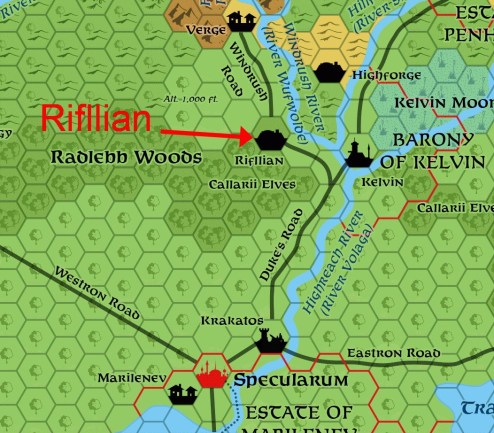