The Republic of Darokin
Known World
Brun
“Darokinians claim to be peaceful merchants against war, but the difference between them and us is that they pay others to fight their battles, and they use their speech to convince them they are right in their abuses.” – Sempronius Gallo (!), Thyatian diplomat in Darokin

Ruler: Chancellor Corwyn Mauntea (!)
Government: Plutocracy ( see Darokian Merchant Houses and Guilds )
Capital: Darokin City
Languages: Darokinian
Population:
Coinage: The Darokinian gold piece is the daro, its silver piece a tendrid and its copper piece a passem. Darokin mints an electrum piece called a half-daro. Amongst the great merchants, and quickly filtering down is the idea of the ‘Certified Letter of Credit’ (cloc).

The Land
Darokin is one of the wealthiest nations of the Known World – but its wealth is not so noticeable as that of other nations. In Darokin, the wealth is spread a bit more evenly throughout the population; with Darokin’s peasants far better off than peasants all over the Known World. The land is rich: the Streel Plain, the heartland of Darokin, where half the nation’s residents live, dominates the centre of the nation. The farmers of the Streel Plain are able to grow enough grain to feed the whole nation twice over. Near the plain is the mighty Lake Amsorak, a freshwater lake that provides a rich bounty of fish. The abundance of agriculture is half the source of Darokin’s wealth; the other half is the nation’s formidable merchant class, which hauls the excess food to most of the nations of the Known World and returns with trade goods from these distant places. Darokin has just one major port, Athenos, so merchants are usually involved with land travelling caravan ventures, and resort to adventurers and mercenaries for their protection. There are several major cities in Darokin: most notable are the capital, Darokin City, that acts as the middle of the web of Darokinian trade; Selenica, in the southeast, centre of the caravan activities toward the Kingdom of Karameikos, Emirates of Ylaruam, Kingdom of Rockhome and Thyatian Empire; and Corunglain, a very warlike city on the border with the dangerous humanoids of the Broken Lands. A notable feature of Darokin is the fact that the whole Kingdom of Alfheim is encircled by Darokinian territory. Relationships between elves and humans are on good terms. Dangerous areas include the Malpheggi Swamp in the south, where monsters thrive, and the Orclands, on the far side of Kingdom of Alfheim which is officially part of Darokin but in fact in the hands of humanoid raiding bands.

History
Early on, this region was settled primarily by orcs and human tribes. Not surprising, the orcs were a constant nuisance. With the help of the Kingdom of Alfheim elves, a human clan called Eastwind came to begin uniting the humans while claiming territory from the orcs. In the first century AC, Ansel Darokin (!) became the first of the Eastwind kings. His dynasty was to end with the death of his grandson in 87 AC. With no heir to the throne, the humans were too disorganized to fend off the vengeful orc hordes. Again the elves of Alfheim aided the humans by backing one of the three candidates for rulership of Darokin, and offering aid if the humans would acknowledge their choice. Corwyn Attleson (!) was able to quickly unite the bickering factions under his banner with the help of his elvish backers, and succeeded in driving the orcs back. Over the next few centuries, the Attleson dynasty purged Darokin of all orc threats. Eventually, the era of Darokin kings came to an end when Santhral II (!) died without an heir. For the next two centuries, most towns and villages governed themselves. The people began to look to wealthy landowners for leadership, as it was they who maintained roads and such, even if only in their own best interests. Thus, wealthy businessmen began to gain much power. In 927 AC, merchants and businessmen founded the Republic of Darokin for mutual economic gain. Darokin was a land of conflict between humans and humanoids for a long time, until elves migrating from the west reached the region and settled down in what would become known as Alfheim. With the help of the elves, the balance in the region was tipped, and the Eastwind clan of humans got the upper hand, and founded the Kingdom, that later took his name from one prominent member of the clan, Ansel Darokin. Later, the power went over to the Attleson clan, but decreased contact with the elves resulted in misunderstandings and eventually into the Elfwar. Orcs took advantage of the situation, and Corunglain was besieged and sacked before elves and humans put an end to a fruitless war.
After the death of the last King of Darokin, Santhral II, in AC 723, political unrest spread through the land, until, around AC 927, the richest merchant houses and families agreed on a central government for the entire country.

The People
The Daros are a heterogeneous population, made up of several peoples, and this has resulted in a population of light olive complexion, with hair and eyes that can be of almost any colour, with brown hair and eyes being the most common. They are a notoriously hard working lot; most are driven by the desire of success. Each generation wants to live in better surroundings and clothe and educate their children better than the last generation did. Darokinians as a people are notoriously opposed to war and other violent solutions, but prefer to settle things by diplomacy. There is a national diplomatic service known as the Darokinian Diplomatic Corps, whose function is to try to solve internal and foreign policy problems peacefully. Government and Religion

Although nominally a Republic, Darokin is a plutocracy – ruled by the rich – but a very long sighted one. The plutocrats believe that keeping the standard of living high and keeping the laws fair throughout the social levels makes workers enthusiastic – so far, they have been successful.

The merchant houses are the true political powers within the nation: the Merchant’s Guild has the monopoly over trade, and non-members are not allowed to trade with members, so not being a member means no trade, no business, no money. The ruler of the nation is the Chancellor, who acts as the President of the Merchant’s Inner Council, and thus controls the Merchant’s Guild, supported by the leaders of the most important Trading Houses.

Owing to the cultural diversity that makes up the Republic, the religions followed by the people are similarly heterogeneous. There is no official religion in Darokin and nearly all religions of the Known World are practiced here. 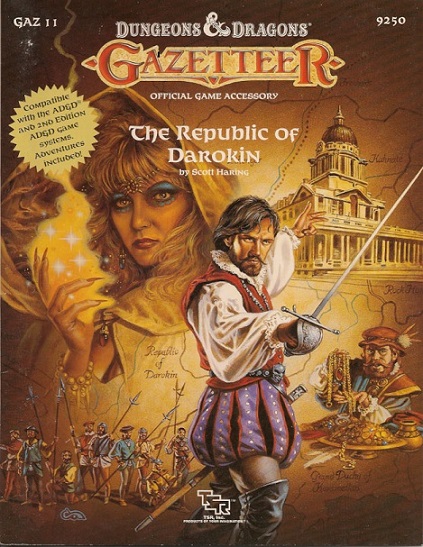