The Principalities of Glantri
Mystara
Brun
“A land of darkness, where all the enemies defeated by the Prophet brood. Yet, these heathens possess a disturbing degree of knowledge in the science of nature and magic. No doubt, a knowledge derived from the gifts of demons.” – Hakim ibn Yezeed al Nisr, Dream of the Desert Garden University, Emirates of Ylaruam

The Land
Glantri is enclosed between two major mountain chains, the Kurish Massif Mountains and The Wendarian Range through which several major rivers have carved wide valleys, which are densely inhabited. Forests cover the majority of the mountain lands, while the hills are a herbalist’s treasure trove, rich in plants that range from the uncommon to the legendary. The valleys, on the other hand, have been cleared for farming.

The Capital
The capital, Glantri City, is a town of 50,000 built partially on a set of islands at the confluence of the Isoile River and Vesubian River. The city is known for its fantastic buildings, the widespread use of magic in construction and for public convenience including public lighting, its maze of channels, as well as for the foremost The Great School of Magic in the Known World.

History:
Several centuries ago, humans calling themselves Flaemish settled the region now known as Glantri, and built the city of Braejr. About 300 years ago, as foreign settlers began coming to the area in large numbers, frictions between the Flaemish and the settlers escalated gradually. Finally, the frictions exploded into war.

During this time, an Alphatian Empire wizard and warlord named Halzunthram arrived and sided with the coalition of settlers, preventing the fragile coalition from being destroyed. The region was divided into three provinces, ruled over by a council. Halzunthram executed a coup and took control of that council.

Infuriated, the elven and human settlers sided with the Flaems in revolt against the Alphatian wizard. This went on to become the Forty Years War. During this time a plague struck the region, afflicting almost half the population. The pestilence was blamed on newly-arrived dwarven settlers, who were systematically hunted down and expelled from the area.

During one of the dwarf-hunts, Lord Alexander Glantri ambushed Halzunthram, and the Forty Years War was over. The city of Braejr was renamed Glantri City in Lord Alexander’s honor. The Republic of Glantri was formed.

In the year 858 AC, a parliamentary session called the Light of Rad reserved the right to rule for wizards only, and granted the rulers the hereditary title of Prince. Outraged, the established nobility revolted but were crushed within a year. The Wizard-Princes have ruled unchallenged to this day.

The Highlands, for such was the original name of the region, have been settled since before the Great Rain of Fire. The first settlers were elves, but their were forced to flee, or destroyed, in the wake of the great cataclysm. Then, from another plane, came the Flaems, a people that shows a notable affinity with the energies of Fire. The Flaems founded seven duchies in the region, and clashed with their neighbours from the plains of Ethengar.

In time, other colonists arrived, first elves, then humans from the Thyatian Empire and Traladara and even Alphatian Empire, then dwarves from Kingdom of Rockhome. Other, more mysterious, colonists came in through magical ways, the Klantyrians and the Averoignians.

There was a time of wars, as the Flaems resented the intrusion. The colonists fought back, until the distant Empire of Alphatia tried to take control of the region, with the help of dwarven colonists. The humans and elves, not willing to let their freedom be taken away, allied with the Flaems, chased the Alphatian troops and their dwarven allies and founded a Republic, which later took its name from the most prominent war hero, Alexander Glantri.

Nowadays, Glantri is no longer a true Republic, since a council of hereditary Princes and a parliament of minor nobles rule it.

Moreover, two different clans of elves, the Erewan and the Belcadiz, live in the southernmost Principalities, and a number of weird creatures can be found within the borders of Glantri. A good number of lupins of various breeds and a few rakasta and goblinoids complete the population. No dwarf or halfling resides in the Principalities, since the local law hunts down these demihuman people.

Most of these ethnic groups are fiercely regional when domestic matters are concerned, but cooperate when facing an external enemy–be it Alphatia, dwarves, Ethengar, or the goblinoids.

Government and Religion
A Council of Princes rules the Principalities of Glantri. Only when a decision cannot be taken, due to the lack of a clear majority, the issue is brought to the Parliament, an assembly where each noble has voting power proportioned to his title.

Formally, the head of state is the Chancellor of the Princes, currently Prince Volospin Aendyr of Blackhill, but in the Glantrian mindset the Headmaster of the Great School of Magic one Étienne d’Ambreville, the foremost centre of magical training and research, has more authority–which is mirrored by his higher power in votes. Behind the scenes, a large bureaucracy works to enact the rulings of the Council and Parliament, while nobles maintain nearly complete authority in their fiefs.

Perhaps the most peculiar characteristic of Glantrians is their lack of faith. No Immortals are openly worshipped in this land, and, moreover, clerics are outlawed. Only some forms of mysticism, like the worship of Magic itself preached by the Shepherds of Rad, or the reclusive mystics of Lhamsa, are allowed. 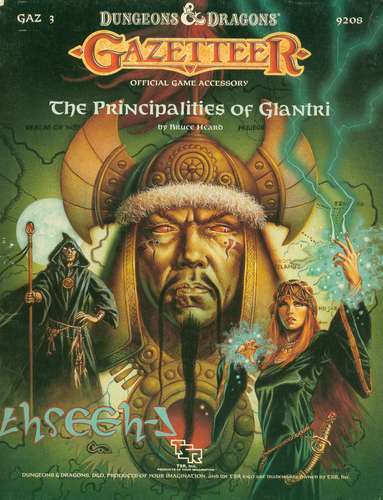