The Mystaran calendar is a lunar calendar, based on the stations of the two moons. Each month is 28 days long and there are 12 months in the year (so there are 336 days in the Mystaran year.) Most nations have adopted the Thyatian Empire’s calendar which is dated from the crowning of the Empire’s first Emperor, Zendrolion Tatriokanitas. The name of the months and days depend on the nation. The asterisk ( * ) marks the first day of the year. 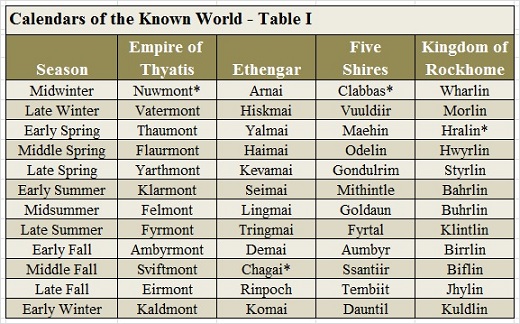 Due to the strange rotation and illumination of the moons, each lunar station lasts seven days, and these mark the seven days of the week. Each month begins at (NM) new moon (with the dark moon covering Matera, the light moon), moving into (FQ) First Quarter moon (with a quarter of Matera visible), (FM) Full Moon (where Matera has moved in front of the dark moon), and ending in (LQ) Last Quarter moon (where the two moons have made a full orbit and are coming around for the next cycle). 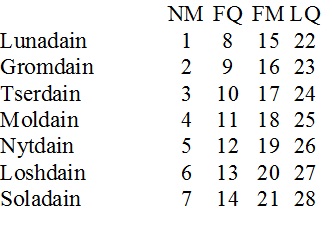 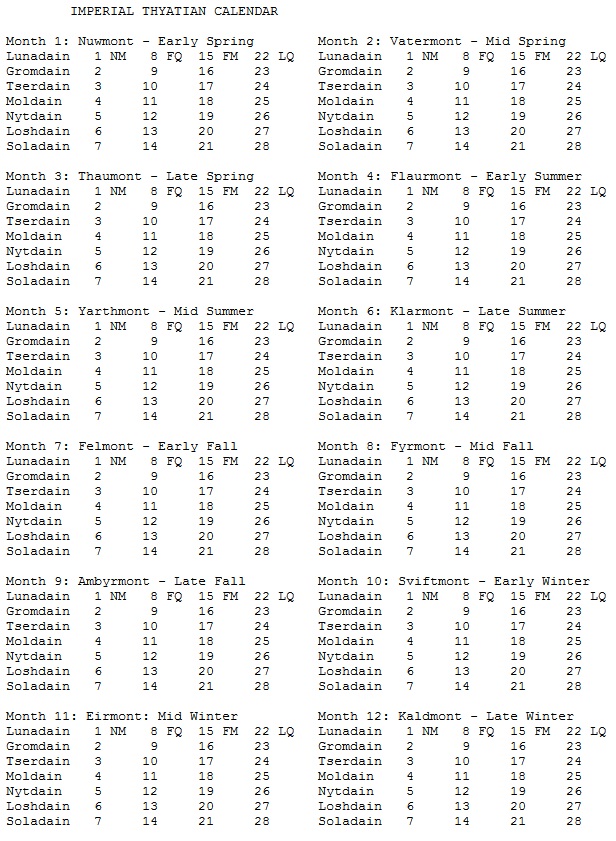 Mystara Horoscope
Mystaran Horoscopes
As in all regions, when you were born is believed to affect how your life will pan out. This is largely believed to be due to numerous influences: stellar influences, the placement of the moons, and the time of day. Each month is associated with one of twelve astrological signs: Manticore (Newmont), Hydra (Vatermont), Centaur (Thaumont), Basilisk (Flaurmont), Chimera (Yarthmont), Gorgon (Klarmont), Griffon (Felmont), Dragon (Fyrmont), Salamander (Ambyrmont), Pegasus (Sviftmont), Warrior (Eirmont), Giant (Kaldmont).

The traits of ascendancy depend on what week the child is born. Children who were born in the first week are said to be Sun Ascendant, second week Land Ascendant, third week Sea Ascendant, and fourth week Sky Ascendant.