Mystara is a planet, the Known World is a section of that planet who has cultures and a level of technological development that resemble Europe around the 15th century, but without gunpowder. Nations of the known world display a great range of government types. Some nations are populated entirely by demihumans and/or humanoids. By common convention, the boundaries of the Known World are those covered in the world map, the boundaries of the underground world beneath the Known World are the Shadowdeep, and the lost world land in the middle of the world is the Hollow World.

Two moons orbit the planet of Mystara. Matera is a moon much like our own, whose phases govern lycanthropy (werewolves, werebears, etc.). Only the Immortals of Mystara inhabit Matera. They live in a city, Pandius, where they can meet and watch over Mystara. Patera, is an invisible moon that cannot be seen from Mystara. See the Mystara Calendar.

The mayor races of Mystara are humans ( with their different Human Ethnicity ), Elves-High, Dwarves-Hill, Halflings-Lightfoot, Half-Orcs and Gnomes-Rock. But there are many nations present and some of them have complete cities like the Shadow Elves.

The Cosmology of Mystara is located on the Prime Material Plane but it also includes the Ethereal Plane, Elemental Planes and other galaxies, star systems, dimensions and realms. 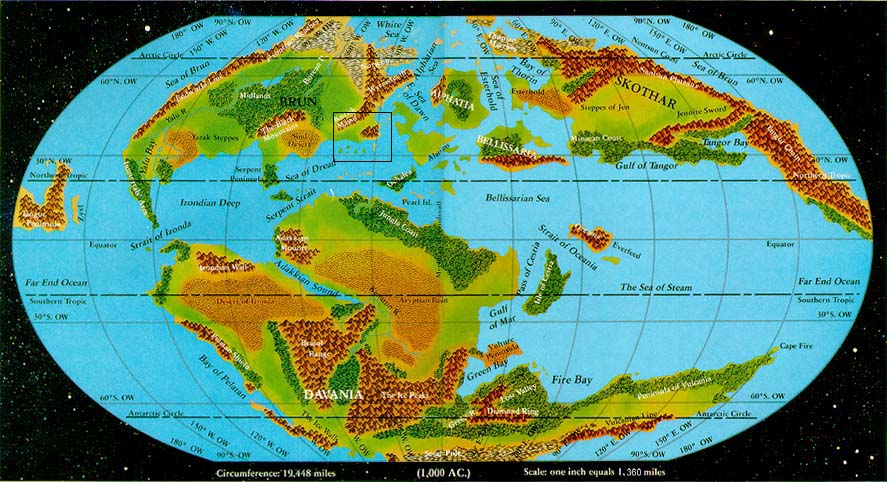 Mystara Teaser Introduction on the Vault of Pandius