History:
The Clan Alfasser, or Water Elves, claim to be the original settlers of the Minrothad Isles. They say they migrated to the area around the same time as the cataclysm known as the Great Rain of Fire, thousands of years ago.

Humans later came to the islands, bringing the concepts of slavery, and the plague of lycanthropy along with them. Over the years, halfling slaves were introduced to the islands, and were later freed with the help of the elves. Dwarves, seeking refuge from the Years of Infamy in the Principalities of Glantri, were lured to settle in Minrothad by the trade guilds to provide fine metalworking and similar crafts not found previously. Now, all races are welcome in Minrothad.

The Minrothad Guilds have grown to become a major economic power in this region of the known world. In fact, during a confrontation between the Thyatian Empire and the Alphatian Empire, Minrothad traders carried troops, supplies and plunder for both sides in the conflict with carefully negotiated contracts to maintain their neutrality.

Society & Culture:
The Minrothad Guilds are organized in the Castes and guilds. The concept of career change, however, is alien to most Minrothaddans. The average citizen believes that a person is born to be what he is, and nothing else.

Map of the Minrothad Guilds 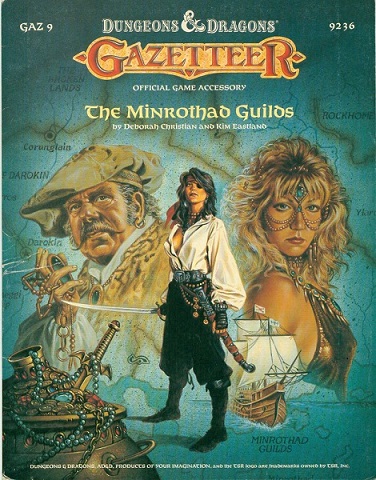