The Grand Duchy of Karameikos
Map 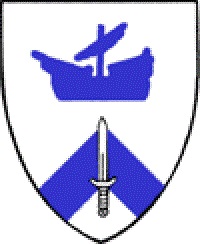 “Why should you ever want to go to Karameikos? There’s nothing there – no comfort, no big cities, no luxury, no good food nor wine. Just superstitious natives, humanoids and stupid Thyatian soldiers.” Boris Gorevitch-Woszlany, Glantrian nobleman

Rumors, Lore and Places of Interest:
Specularum is named for the mirror-like reflective quality of its harbor.
The forests of the nation are still largely unsettled, and hence, unexplored. Most villages have legends of ancient ruins haunted by spirits of the past, or tales of werewolves or other creatures roaming the woods.

The Land
Karameikos is a deep, dark land; mostly wilderness which man throughout recorded history has tried to occupy. Karameikos sits on the south shore of the continent of Brun, west of The Thyatian Empire and east of the Five Shires; to the north, broad mountain ranges separate the nation from The Republic of Darokin and The Emirates of Ylaruam.

Most of Karameikos is covered with thick forests, hardwoods and softwoods, and is largely unexplored. There are broad patches of rich soil, especially beside the broad Highreach River where farming is good.

The capital city of Specularum is a thriving and very active seaport with around 50,000 inhabitants; other notable sites are the city of Kelvin and the town of Threshold, in the northern hill country, a haven for adventurers surrounded by humanoid-inhabited wilderness.

History
In ancient times the land of Traldar was home to a heroic civilization of barbarian-like people. About two thousand years ago, a massive army of beast-men attacked the Traldar people. The war raged for years and spawned countless legends (chief among them the stories of Halav, Petra, and Zirchev, the later patron Immortals of Traladara); but eventually, the gnolls were driven out, leaving the glory of the Traldar heroes in ruins. The people, now calling themselves the Traladarans, then founded a nation of loosely allied, small communities in the deep woods.

900 AC: About a century ago, the Thyatian Empire, on one of their periodic conquest sweeps, moved an army into Traladara, conquering the coastal regions and some inland communities and declaring the nation to be a protectorate of the Empire.

970 AC: Duke Stefan Karameikos III trades his ancestral lands (the Duchy of Machetos) to Emperor Thincol for independent rulership of Traladara, which is renamed the Grand Duchy of Karameikos. Duke Stefan sails to and takes possession of his duchy, then begins parceling out land and titles to his Thyatian followers. He begins building roads across the Duchy ( including the main Dukes Road ) and a strong military to protect it.

The People
An Overview of Traladaran Culture and Customs
There are several distinct cultures present in Karameikos. The Traladarans, a pale, dark-haired people, have lived here for thousands of years. Energetic, romantic, artistic and superstitious; they are descendants of the Traldar. The Traladarans are ruled by a conquering class of Thyatians brought here about thirty years ago by Duke Stefan Karameikos.

There are also two elven clans here: the vigorous Clan Callari in the central parts and the Clan Vyalia in the northern parts of the eastern forests. In the north is a community of dwarves and gnomes called Highforge.

There are many frictions between the Thyatians and Traladarans, but increasingly they are coming to think of themselves as a single nation. Despite the exploitative nature of many Thyatian nobles, who see the Traladarans as a work resource to be used for maximum profit, Stefan has enforced many laws to ensure Traladaran equality.

A Traladaran custom for kicking the birds out of the nest which has been adopted by the Thyatian living in Karameikos: The Shearing Ceremony.

Government and Religion
Karameikos is officially a Grand Duchy for political reasons, but is effectively a monarchy. Stefan Karameikos, the ruler, chose to be only (Grand) Duke as a political signal to other nations that his nation has retained its ties to the Thyatian Empire, and that to invade Karameikos would therefore be to invade Thyatis. The nation also has several semi-autonomous baronies.

In the western part of Karameikos, on the Gulf of Halag facing the Five Shires, is one of several semi-autonomous baronies, Hagar (formerly known as the Black Eagle Barony).

The patron Immortals of the Traladarans are Zirchev, Petra and Halav, the heroic leaders of the Traldar war against the “beast-men”. The so-called Church of Traladara worships them. Thyatians for the most follow the Church of Karameikos, founded by Thyatian priests about thirty years ago. More conservative Thyatians still have representation in the Church of Thyatis ever present in many mayor cities.

The Army
Information about Karameikos Army.

Notable Rogues’ and Thieves Guilds:
The Kingdom of the Thieves and The Veiled Society are headquartered here, along with numerous cells from the Iron Ring. Various freelance rogues operate within city limits, as well as gangs of toughs that roam most of the poorer sections of the city.

Other Organizations:
The Griffin Knights are the mayor Knight Order of the Kingdom.
The rumors about the secret Order of the Rose are interesting…

Local Laws:
The Duke’s Law is as follows, with repeat offenders of these crimes getting stiffer sentences within the fine category or even raised by one category:

Class One Crime (Unarmed Assault, Theft of goods totalling less than 10 gp in value): 1-6 gp fine and/or 1 day in jail.

Class Seven Crime (Deliberate Murder, Treason [assault against the Royal Family, Mutiny, Disobedience of Orders by Military Personnel in Wartime, Betrayal of State Secrets to a Foreign Power, Disobedience of a Royal Command from the Duke or Duchess]): Death.

Notes
Karameikos is noted for its high share of monsters. From Vampires and Werewolves to Goblins, Bugbears and Orcs. People of Karameikos are superstitious and they have a reason, monsters do wander around and are a real danger to their lives. See for example: Karameikos Semihuman Tribes

Other aspect of the country is the many legends related to the times before the conquest of Karameikos by the Thyatian Empire for example: Beastmen of Traladara, Caverns of Quasqueton, Labyrinth of Ekelon and The Palace of the Silver Princess. There are also legends of Karameikos Legendary Magic Items.

Known Dragons of Karameikos:
Argos The Worrier (Green) on Dymrak Forest and his son Verdilith on Penhaligon
Caeric (White) on the Black Peak Mountains
Korbundar (Blue) South of the Altan Tepe Mountains
Kraton (Red) on Penhaligon
Vulomar (Black) on the Blight Swamp
Valamaeraen The Bronze (Gold)

For more information see GAZ 1: The Grand Duchy of Karameikos, and Karameikos: Kingdom of Adventure. 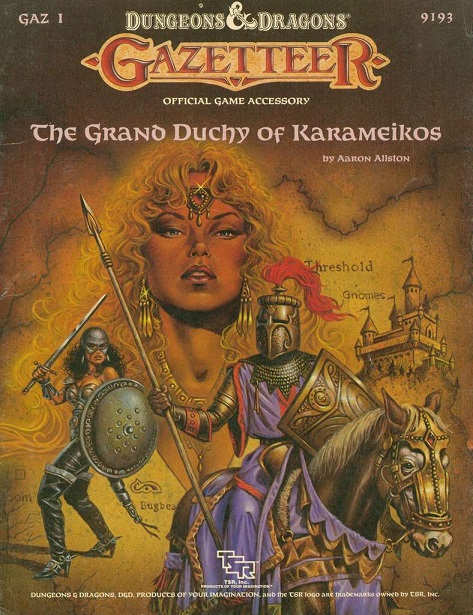