The Kingdom of Alfheim

“Alfheim is a land of elves, made for elves and by elves. Legend says they raised their home forest out of a wasteland using the most powerful sorceries. Although Alfheimers happily engage in trade and let foreigners come and live in Alfheim Town, the rest of their nation is shrouded in mystery and they do not take any interruption lightly.” – Leonard de Fausseflammes, Glantrian Wizard in a class at the Great School of Magic
Map and other details

The Clans
Clan Chossum: Elven merchants, traders, and artisans.
Clan Erendyl: The royal clan, they have long ruled Alfheim.
Clan Feadiel: Not one of the original clans (they joined later on the march); they are isolationist and seem almost to be hiding from something.
Clan Grunalf: Expert druids and woodworkers.
Clan Longrunner: Explorers and athletes.
Clan Mealidil: Reclusive, isolationist mystics.
Clan Red Arrow: Militant warriors

The Land
The lush Canolbarth Forest spans a roughly triangular area in the eastern part of the Republic of Darokin, and is completely contained by Darokin’s borders, in the basin formed by the Dwarfgate, Altan Tepe and Cruth Ranges. The thick woods intermix with gently rolling hills and a rich network of small waterways and lakes. The only major cleared section of the land is the site of Alfheim Town, all the remaining Alfheim population centres are scattered through the thick of the forest and built in the elven fashion of tree houses, well above ground. The huge and unique Sentinel and Home trees of Alfheim are grown for the sole purpose of creating dwellings and keeping the continuous forest mantle. Other than the seven main clan enclaves, the nation does not follow a standard division into regions and dominions.

History:
Most of the facts about elvish and Alfheim origins are shrouded in mystery and myth, but it can be established that some 2000 years ago, they roamed across southeastern Brun until they found a barren land, devoid of any population and using magic of colossal proportions they raised Canolbarth Forest out of bleakness. The surrounding lands ultimately reacted to the presence of elves: the still young Darokin initially allied with elves and both parties profited from collaboration and trade, though, some 500 years ago, Darokin-Alfheim border hostilities escalated to a war whose fast resolution in favour of the elves made Darokin reconsider its attitude and, since then, see Alfheim as a traditional ally. Others coveted the virtue and magic secrets of Canolbarth forest, and a powerful wizard even attempted an invasion of Alfheim with the aid of extraplanar beastmen. Alfheim has survived these ordeals, and the last five centuries have been relatively peaceful. Dwarf-elf antipathy is well known, though it normally takes the form of “mischief incursions” from and into Rockhome, more a matter of hurting prides than of open hostilities.

The history of the elves begins thousands of years ago, on another continent. Only the story of Alfheim will be covered here.

According to the elves, this region was once an area of barren steppes. When the elves arrived from far to the west, they cast powerful magics. These spells brought rain to the barren landscape and over time, the Canolbarth Forest began to flourish where nothing would grow before.

Over the centuries, there have been many attempted invasions of this new elven homeland. Most of these have been by greedy humans, covetous of the newly fertile landscape. All attempts have met with disastrous results, including those by the surrounding Republic of Darokin. The last major invasion of Alfheim was attempted over 400 years ago. No one has transgressed against the elves since.

The People
Elves are marked by two facts: fidelity to their clan and long lifespans. An 800-year life expectancy causes elves to waver between gentle complacency and lack of urgency and, in contrast, a feeling of angst and a wish to live life to its fullest to avoid the pains of boredom. Nevertheless, shorter-lived races can have a hard time in understanding the irregular and slowly maturing processes of economic and political decision-making among elves. The idea of clan expands the human concept of family to the whole group and links the present-day Elves to a whole line of history that leads to the mythical hero founders of the clans. Seven major clans are known in Alfheim: Chossum and Erendyl, traders and artisans respectively, and the most likely to engage in business with outsiders; Red Arrows, warriors and wardens; Grunalf, with a reputation as rangers and monster slayers; and the mysterious Feadiel, Mealidil and Long Runners, keepers of magic and lore about which foreigners can just wonder.
Most of the population of non-elves in Alfheim are limited to Alfheim Town itself, where humans are a majority. This unique settlement is built in two levels: a standard town on the ground and a tree-town for the elves who dwell and trade in the community. For such a secretive realm as Alfheim, this town is a true melting pot: there are quarters representative of major and neighbouring nations (Glantri, Darokin, the Shires, Minrothad, Karameikos and the Empires of Alphatia and Thyatis) and even dwarven and orcish communities.

Government and Religion
Alfheim has a king, Doriath of Clan Erendyl, though his role and power of decision is subject to the Clan Council, made up by the Clanmasters of each clan. The king gets one regular vote in the council, and his main responsibilities are leading the army and making decisions that affect the nation as a whole. A Clanmaster is the oldest active member of his clan; he works hand-in-hand with the mysterious Treekeepers, the spiritual leaders of Alfheim. The rumoured “Way of the Tree” cares for the spiritual and magical needs of the elves, who don’t have a standard clergy and temple structure to speak of, through the nurturing of some kind of relic that is said to be a living testimony of the elven Immortals, amongst which are two of the ancient migration leaders, Ilsundal and Mealiden. Elven “tree magic”, as it is called, isn’t as flashy as the displays of human wizards, but is nevertheless powerful and the subject of many rumours, like the creation of magical elven blades, cloaks and boots, which light the fantasies and greed of many adventurers.

Rumors, Lore and Places of Interest:
Alfheim Town is a city built partly in the branches of enormous trees.
The Canolbarth Forest encompasses all of the nation of Alfheim.
Various “Magic Points”, some good, some bad, are said to lie deep within the forest. These areas are said to have strange magical effects.
The elves are said to have intelligent horses, and trees that provide many magical items and benefits.
The town of Ainsun is the Head-Quarters of the Grunalf Clan.

For more information see GAZ 5: The Elves of Alfheim. 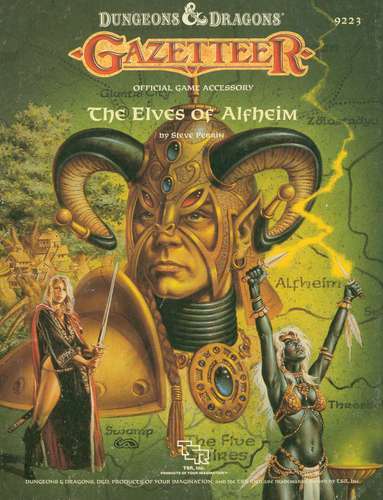