Though the vast majority of Ierendians trace their heritage to the mainland, Ierendi’s social customs are based on those of the Makai, which promotes a slow, easy pace of life. The islands are home to a large number of pirates, though in recent years the government has attempted to drive them away. Ierendi has in the past hundred years promoted itself as a centre for the Known World’s growing tourist trade, and the economy of many of the islands is centered around that industry. Ierendi also boasts a famous naval academy which draws skilled warriors from all over the Known World.

Makai are the native islanders to Ierendi. Playful in times of peace, fearsome in times of war, the Makai never do something halfway. They are a simple people, living off the vast bounty the isles have to offer. Their skin tone is typically bronze, with straight or extremely curly black hair. They speak their own traditional language ( Makai Words ) but also learn common and other languages. Dangerous Ierendi Lizardmen dwell in different parts of the Archipelago.

Though Ierendi has a King and Queen, the real business of running the country is done by the Ierendi Tribunal, a cabinet of representatives from the most influential aristocratic families in Ierendi. The King and Queen are mere figureheads, chosen every year in the Royal Tournament of Adventurers, with the winners of the male and female divisions taking the throne. Obviously, the King and Queen are not necessarily married to each other.

Climate
Ierendi tends to be hot and wet, especially wet. Winter begins as the previous year’s hurricane season ends, wobbling between the forties and sixties degrees Farenheit with very brief freezing spells or unusually warm spells. Cold rain and fog is very common, especially fog in the morning. Spring is short and relatively dry, followed by a very long hot and humid summer which often spikes up into the one hundreds and is commonly in the nineties. Starting in late summer through the fall, hurricanes begin to periodically slam into the isles, coming up from the southeast and rarely the east. Thyatian Empire and the Minrothad Guilds end up with most of the more easterly hurricanes, however.

Fauna:
Typical land creatures in the island are: Boar , Cocodriles , Tigers , Apes , and Monkeys . Insects and giant insects are also present like Centipedes , Scorpions and Spiders . In the sea will find Sharks , Octopus , Whales and a large variety of fish.

History:
The Ierendi Archipelago was colonized by the Azcan Empire and the Nithian Empire more than three thousand years ago on 500BC. The Makai are a mixture of these races or are descendants of their slaves or both.

Halflings report that Ierendi was founded by criminals and outcasts from the Five Shires on 570AC, although the local Makai people will regard this legend with good-natured contempt. Clan Caulker and Clan Longkeel were two of the biggest halfling clans on the island.

Decades later, on 586AC, the Thyatian Empire send three fleets and invaded Ierendi, the biggest battles were Battle of Ierendi Island, the War of Fletcher Island, and the Battle of the Trap. They established a penal colony on the island group, claiming it for their own in the process.

In AC 595-598, General Bronicus Galbanus of the Thyatian Empire was sent in an expedition against the Atruaghin Clans’ peoples of the Children of the Turtle and of the Tiger, which led to the capture of many slaves brought to the Thyatian arkets, but which was ultimately repelled and did not bring any lasting territorial gain to the empire. The ships used Ierendi as a port of sail.

But just 30 years later, on 600AC, the prisoners revolted and drove the Thyatians out. The leader, known as Mad Creeg, named himself the First King of Ierendi. For a few hundred years Ierendi was a monarchy with nobility houses in control of the isles. This nobility houses had all the makai as slaves.

During the revolution makai natives, halflings and convicts joined forces to repel the Thyatians. Even thyatian convicts like the former Thyatian army officers or noblemen or functionaries, who had experience in army, fleet, and administration management; one of these, for example, was Tiberius Alexander, a former senator who helped put together a fleet for Creeg.

In order to avoid exposing the empire’s western side to attacks by Mad Creeg’s pirate fleet, the Thyatian Empire government chose to sign a ten-year truce with the newly-proclaimed King of Ierendi in AC 602, temporarily recognizing his possession of the archipelago but not his royal title in exchange for abstention on Creeg’s part to launch pirate attacks against Thyatis. This truce would have actually been renewed for many years until AC 643.

A fierce revolution on 775AC of merchants and makai against the nobility ended the age of monarchy and the nobility houses fell, or transformed… Slavery was also abolished during those events and since 775AC and over the centuries, however, the station of King and Queen has ceased to be hereditary. Instead, annual tournaments are held as heroes and adventurers compete in contests for the privilege of wearing the crown for a period of one year. The nobility houses have been replaced by a Tribunal of the heads of various government agencies. They oversee every aspect of Ierendi life including the games who are used to chose the King and Queen. Thus, the Ierendi Tribunal holds most of the power in Ierendi, since 980AC.

In 1012AC Ludwig von Hendriks alias Baron Black Eagle was discover to be the leader of the criminal organization Iron Ring and the one who was hiring pirates from Ierendi and the Minrothad Guilds to attack the Five Shires and the Grand Duchy of Karameikos. This event almost lead the Kingdom of Ierendi to be at war with the then newly formed Kingdom of Karameikos. Diplomatic relations ended causing a economic downfall on Ierendi. On time, the Ierendi economy was stabilized with the re-legalization of some kind of indenture slavery and slave trade with other nations.

Customs:
Ierendians enjoy night gatherings after a long day of work. Even when there are many tournaments, many holidays are celebrated on Ierendi: The Days of Right, The Rebirth, The Celebration of the Sea, The Festivities of Sebastian Street, The Dance Carnival, The Festival of Life, and the Ierendi Royal Tournament of Adventurers to mention some of them. They are part of days-long (sometimes weeks-long) festivals who attract visitors from other countries.

Ierendi’s cultural makeup is a mixed and strange one. Makai traditional way of life is one without worries. Dwarves are workaholics, halflings are cunning, elves are skilled. The basic Ierendi could shift between a person who is very resourceful and cunning or a person who cares little about other than his own tranquility. From a hero worshiper with dreams of grandeur to a trickster who has a lose sense of moral. A visiting bluffer could find himself in a battle of wits with the ierendian he wants to trick, and even an intimidate check could be seen as an act of bravery or foolishness.

Ierendi Embassies:
Ambassadors and Embassies from other nations located in Ierendi City. Rumors about them and their current status in Ierendi affairs.

Temples:
Peoples Temple AKA the Church of Ierendi
Makai Shamani
The Eternal Truth
Other religions are present but have not large temples on Ierendi.

Laws
The laws in Ierendi are there to keep the order but are enforced depending on the level of corruption of the law officer and the humor of the judge. This are some basics:

For more information see GAZ 4: The Kingdom of Ierendi. 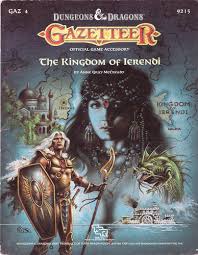 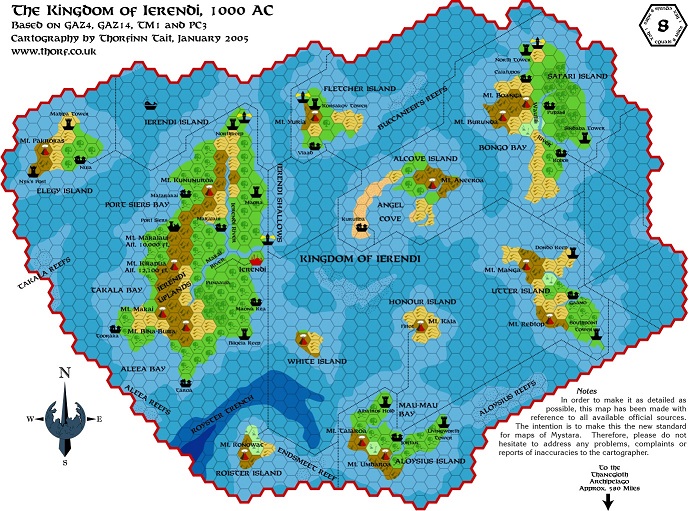