The Five Shires
Ruler: A Council of Five Sheriffs
Government: The Sheriffs are appointed by a Council of Elders, made up from the Elders of each clan.
Capital: Shireton
Languages: Darokin, Thyatian, some scholars speak Lalor (ancient halfling tongue)
Population:

Rumors, Lore and Places of Interest:
The Black Spire Mountains are rumored to be rich with precious metals and gems.
The hin have harnessed a power known as Blackflame, and can draw on that power to create magical items.
The hin, despite their small stature and good nature, are very capable of defending their realm from invaders.

History:
The history of the hin, called “halflings” by humans, has been one of bitter hardship and strife. Since their arrival in the area now called the Five Shires, the hin have been invaded and enslaved several times by orcs, and even by greedy dwarves on one occasion. Each time, the hin would rise against their oppressors stronger than before, until they could hold their ground against any would-be invader.

After the Third Rising, when the hin finally defeated the orcs, began a time of rebuilding known as The Time of Heroes. During this period many hin rose to hero status by reclaiming fringe territories from orcs, human raiders, and dwarven colonists. Once the land was secure, the Council of Elders was restored. To prevent the clans from squabbling over rule of the land, and weakening their hold, the Elders chose a Sheriff to handle defense and rule of the realm. The first Sheriff was Gunzath the Clanless, who served until his death in BC 572.

Gunzath’s dying wish was that the land be divided equally into five regions, for he had five sons and wished to avoid war. The five Sheriffs would each have equal power. Thus the land became known as the Five Shires. Many attempts at invasion have been made by man and orc alike since then, but the long-oppressed hin have turned them all back, including the last one in AC 989 by Baron Ludwig von Hendriks of the Kingdom of Karameikos.

Notes from the Dungeon Master:
This nation is the homeland of the halflings, or hin as they call themselves. For those who don’t know what a Halfling is, they were originally called “Hobbits” but J.R.R. Tolkein’s lawyers forced the name to be changed, threatening litigation. In essence, they are still very much like Hobbits from Tolkein’s books, with a few twists thrown in. 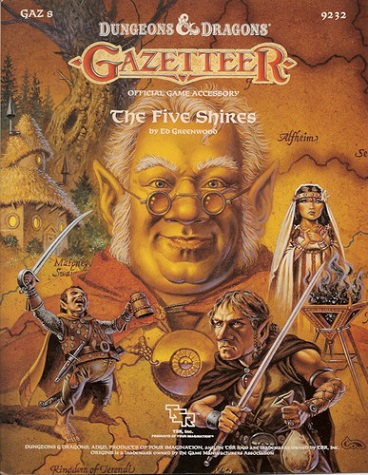 by: qxsilver
See All Pages