Rumors, Lore and Places of Interest:
The people of Ethengar are nomads and do not build cities. Instead, they roam about the plains and make temporary camps.
Warriors of Ethengar fight almost entirely from horseback, and are superb horsemen who can fire a bow at full gallop with deadly accuracy.

History:
For centuries, these wind-swept steppe lands have been home to nomadic horsemen. They would follow their herds across the landscape in search of grazing land. Often, this would lead to fighting amongst the clans as each vied for rights to the best of the grasslands.

Each of the clans in Ethengar is ruled by a Khan. Historically, there have been several attempts by some to claim the title of Khan of all Ethengar. These reigns were usually short-lived, as someone would assassinate the ruler, and then the clans would fight among themselves for succession until they exhausted themselves. The clans would then return to their previous wandering existence.

In 984 AC, however, Moglai Khan united the Murkit tribes under his banner, thus beginning his rise to Golden Khan. He soon wiped out the Maghur and Hajik clans. Then he lent his warriors to other clans in their battles in exchange for swearing loyalty to him. In this manner he was able to quickly unite all of the clans under his rule. Now, with the clans no longer permitted to make war on one another, Moglai the Golden Khan has begun the slow process of modernizing this nomadic nation.

Some are concerned about Moglai’s consolidation of power, as the Ethengarians have attempted invasion of the Principalities of Glantri in the past. They are also reported to have completely leveled a city just over the border in the Heldann Freeholds in response to Heldannic settlers encroaching on their territory.

Notes from the Dungeon Master:
This culture is drawn from the history of the Mongolians. This is a good point of origin if you want your character to have that exotic Eastern touch of color.

For more information see GAZ 12: The Golden Khan of Ethengar. 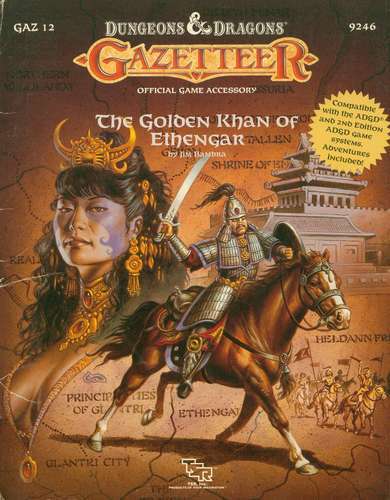