The Emirates of Ylaruam
Ruler: Sultan Ali Ben Faisal
Government: Monarchy
Capital: Ylaruam
Languages: Ylari
View map
Rumors, Lore and Places of Interest:
The vast majority of the Emirates of Ylaruam is covered by the Alasiyan Desert. This desert stretches from the east near the coast, all the way to the western-most border and is occasionally broken by oasis.
History:
For centuries this area has been home to various tribes of nomadic desert dwellers, and the hazar, or “house-dwellers”. These two factions often fought for resources in the harsh environment. This went on for many years.

The arrival of both Alphatian Empire and Thyatian Empire forces interrupted the way of life for these nomadic people, as both empires established colonies and built cities in the area. The two great empires also fought each other for control of the region, sweeping aside the people of the Alasiyan Desert. For centuries the scattered tribes of nomads tried in vain to rid their lands of the hated foreigners.

Then, about 200 years ago, came a prophet by the name of Al-Kalim. Al-Kalim was able to unite the emirs of the various tribes into a force to be reckoned with. Over the next few decades, both the Thyatians and Alphatians were driven out. The Confederated Tribes of the Emirates of Ylaruam was founded. Al-Kalim guided his people until his death 100 years ago. He left behind a text called the Nahmeh, which is the foundation of Ylari society.

Notes from the Dungeon Master:
The background for this region draws heavily from Arabian history and mythology. The people have a reputation for intolerance and hostility towards non-believers, or infidels. Others say they are a noble and proud people, and they show respect to those they believe have earned it.

For more information, see GAZ 2: The Emirates of Ylaruam. 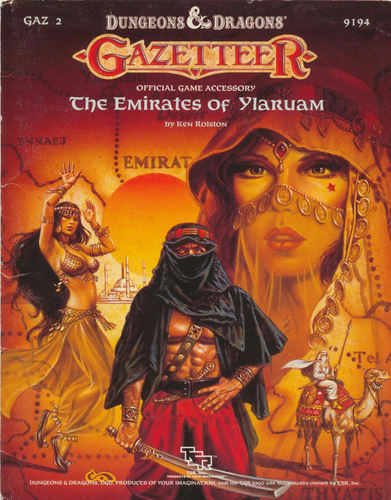