The Land
The Broken Lands is the most inhospitable and treacherous of environments in the Known World, the landscape is one of constantly shifting grounds due to ever present earth tremors, volcanoes spewing forth lava or noxious gases, geysers, scalding mud pits and dust storms. The air is heavy with the fumes blown from sulphuric puddles and fissures venting often toxic gases from deep underground. The land itself is a region of rugged hills and mountains incised by narrow canyons, the Vesubian River and Streel River cut through the area although the areas of dangerous rapids make them unnavigable to all but the foolhardy. Caravan trails pick an unsteady course beside these rivers. The climate of the Broken Lands is equally as fierce with the surface being blasted by the sun throughout summer or frozen by fierce winds during winter. The Broken Lands is bordered by the Principalities of Glantri to the north and west, the Republic of Darokin to the south and east and the Ethengar Khanate to the northeast.
Some 800 to 1 600 feet below the surface of the Broken Lands is a totally different world, a complex array of underground passageways connect various caverns in a myriad fashions. Rivers of water flow underground into lakes, although far more breathtaking is The Lava Flow, a lake of molten rock in a vast cavern. Rivers falling into the Lava Flow fills the cavern with a thick fog and a thunderous roar. In the middle of the Lava Flow on a floating island of rock sits the ancient city of Oenkmar.

The volcanic nature of the area and the hot and humid conditions created by the numerous interactions of lava and water have made the soils of the caverns exceedingly fertile. Fungal vegetation blooms constantly and grows with speed on most surfaces with ease.

History
Many moons ago King Loark (!) raised a Great Horde in the legendary Quest for the Blue Knife. Whilst ravaging every culture along the way on the quest but in 1709 BC they reached and settled in what is now the Broken Lands, with their quest unfulfilled. Then The Great Rain of Fire came devastating the area of the Broken Lands, killing King Loark and breaking apart the Great Horde.
Over time more humanoids made their way to the Broken Lands, and one or more leaders tried to raise the Great Horde again to threaten the surrounding lands, and despite some successes, they were always beaten back. Still the hold on the Broken Lands is strong, and has never been tested, yet raids on surrounding lands are a constant threat.

The People
Despite the inhospitable nature the surface of the Broken Lands has rarely been seen by humans or demi-humans alike, but it is far from uninhabited, a mistake that very few people get a chance to make twice. The Broken Lands is divided into ten tribes each under the command of a tribal chief who in turn is under the powerful orcish chief, King Thar. Each tribe controls a portion of land both on the surface and underneath the Broken Lands. The ten tribes, and the predominant humanoid population are Bugburbia, bugbears; High Gobliny, goblins; Hobgobland, hobgoblins; Kol, kobolds; Ogremoor, ogres; Orcus Rex, orcs; Red Orcland, orcs; South Gnollistan, gnolls; Trollhattan, trolls and Yellow Orkia, orcs.

Government and Religion
In AC 975 King Thar rose to prominence uniting the Broken Lands. He enforced the Tharian Code of Conduct and created the Tharian Legion. His rule has been strong, but he is also a thoroughly charismatic individual, and despite also being a megalomaniac, he is also the more threatening because of it.

Many of the tribes in the Broken Lands predominantly worship a specific immortal, except for the trolls of Trollhattan, they’re too busy trying to eat things to take time out worshipping things. Bugburbians tend to worship Bartziluth, patron of strength and bravery; High Goblinians tend to worship Wogar, patron of predators and monsters; Hobgoblanders and Yellow Orkians tend to worship Yagrai, He-Who-Always-Rises, patron of the dead or those close to death; Citizens of Kol worship the Shining One, patron of hierarchy and kobold warfare; Ogremoorians commonly worship Jammudaru, patron of fear and nightmares; Rexians worship Karaash, patron of war and destruction; most faiths are practiced in Red Orcland although Wogar is the most common; Ranivorus, patron of influence over the weak is worshipped in South Gnollistan.

Tribes and Lands of Semihumans:

For more information see GAZ 10: The Orcs of Thar. 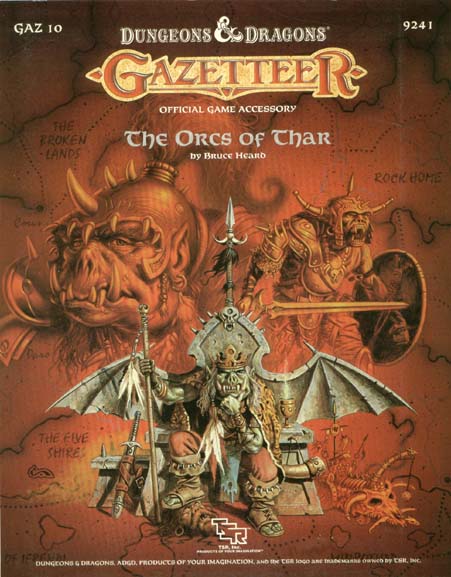