The Atruaghin Clans
Ruler: No recognized ruler higher than tribal Chiefs
Government: No centralized government
Capital: There is no formal capital
Languages: Atruaghin (by clan)
View map
Rumors, Lore and Places of Interest:
The Atruaghin Plateau is rumored to have been raised by Atruaghin himself, to isolate and protect his people from invasion.
The Plateau can be accessed from the Republic of Darokin via an “elevator” constructed by the Mercantile Engineering League of Darokin, with the permission of the nearby tribes.
The Children of Atruaghin have little contact with the outside world, so their culture and technology have remained unchanged for centuries.
History:
Outsiders usually know very little about the lands of Atruaghin. Mostly because of the tremendous physical obstacle the Plateau makes. What is known comes from the oral history of tribal elders.

Legend has it that long ago the tribes were very disorganized and warlike, often fighting each other for land. But at some point, a man known as Atruaghin came to them and managed to unite the various tribes, bringing peace and prosperity to the land. His followers began to call themselves Atruaghin.s Children.

Eventually, Atruaghin left to embark on some personal quest and did not return for several generations. In his absence, his Children were conquered and enslaved by orcs. On his return, he led the Children in revolt against their orcish masters, and used powerful magics to raise the Plateau, so that the tribes may never know the yoke of slavery again.

After that, Atruaghin is said to have joined the ranks of the Immortals, and to this day he still visits his Children to inform them of his wishes.

Notes from the Dungeon Master:
This is a land based on the cultures of North and Central America, prior to the arrival of the Europeans. 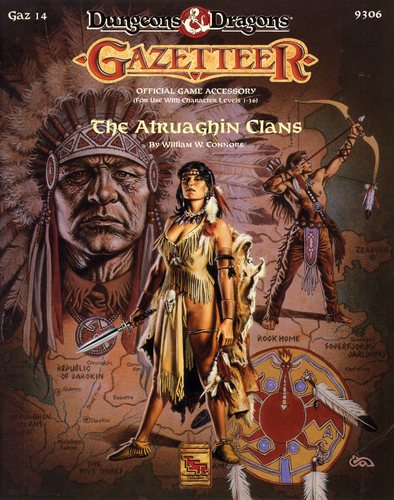