Unlike most humans on Mystara, Alphatians are an “alien” human race, having arrived from another plane ( Old Alphatia ) after they destroyed their original Empire. The Alphatian people consist of two sub-races, the pale-skinned, dark-haired “pure” Alphatians and the more common copper-skinned “Cypri” Alphatians. The center of the continent is still unclaimed and is called the Alphatia Imperial Territories or " No-Man’s Land ".

History:
Legend has it that the Alphatians are originally from another world, where all citizens were wizards. But a war between two rival schools of magic tore their home asunder. The victors eventually traveled to Mystara to rebuild their shattered empire. It is said that the surviving losers eventually found their way to the Principalities of Glantri.

In the course of their expansion, they came into contact with the Thyatians. Conflicts arose, and eventually Alphatia saw fit to solve the problem by conquering the Thyatian tribes. In a quick and violent campaign Alphatia succeeded in subjugating the Thyatians. Eventually, the Thyatians were able to regain their independence, and to this day are still a thorn in Alphatia’s collective side, as both empires have squabbled over territories in the Kingdom of Norwold, the Isle of Dawn, and even in Emirates of Ylaruam.

Originally, nearly all Alphatians were spellcasters, but after the migration to Mystara, the percentage of the population with the ability to wield magic has dropped. Despite this, Alphatia still has one of the highest concentrations of wizards in the world.

Alphatia is a large continent within the Mystara world. It is located east of the continent of Brun and west of Skothar. It is a large Imperial Magocracy (ruled by spellcasters), consisting of numerous Kingdoms loosely united under the rule of an Emperess.

The territories of Alphatia include the island-continent of Alphatia itself, the somewhat smaller island-continent of Bellisaria, the eastern half of the Isle of Dawn, the Alatian Isles south of the Isle of Dawn, Esterhold, a large peninsula of Skothar, and the disputed lands of The Kingdom of Norwold. Alphatia’s capital is Sundsvall, the “City Built by Magic”, a large city in south-central continental Alphatia. Sundsvall is also the capital of the Kingdom of Vertiloch, which is ruled directly by Alphatia’s reigning Empress Eriadna. Other major cities include Aasla, in the Kingdom of Haven, and Draco in the Kingdom of Stonewall, both of which are port cities.

Alphatia’s traditional rival is the Western Thyatian Empire, which was ruled by Alphatia for two centuries (BC 192 – BC 2) until it successfully rebelled and carved its own Empire out of former Alphatian territories. In the AC 1000 timeline, the two powers are locked in a fantasy version of the Cold War.

Alphatia is ruled by an Emperor or Empress who is advised by a Council of Wizards. The power of the Empire is mitigated by the fact that Alphatia’s fractious Kingdoms, with their own rulers, are only loosely controlled and normally very hard for the central government to coordinate. An exception to this came in the Wrath of the Immortals, where immortal interference caused the normally disunited and chaotic Alphatians to unite in the cause of destroying The Principalities of Glantri.

" Justice and goodness, especially toward those who wield no magic, are not important to them. "

For more information see the Dawn of the Emperors boxed set. 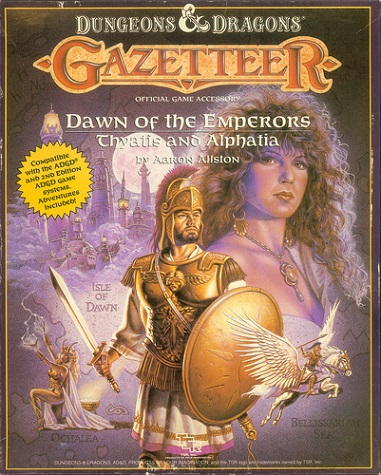