Valora Venatti is a witch and alchemist that embarked on a quest to distant lands for seeking new ingredients, recipes, and methods that she could later commercialize in various small-to-medium scale enterprises: specialized restaurants, apothecaries, etc. She differs a lot from other witches and druids in that she is not the reclusive primitive person who shuns civilization nor wants to unleash the wrath of nature on any person who cuts a mere tree. On the contrary, she views nature as something that is part of humanoid civilizations (and viceversa) and feels no moral dilemma when using nature to enhance society, all within balanced and sustainable limits. As someone who has integrated well with both raw nature and civilization, Valora is both skilled in rudimentary survival methods and also in laws, trade, and diplomacy.

Valora is the firstborn child of a family in Selenica (Republic of Darokin) that owns a high-quality eatery. Her family has also been in the business of alchemy and exploring nature for alchemical interests. They have been aided for quite some time by the druid Ciranne from the nearby mountains, who has been seeking to guide the people of Selenica in living better with nature. It is from all these influences that Valora learned the cooking and alchemy businesses as well as trading. From Ciranne, she even learned how to manipulate magical forces in nature and a more-intimate experience with the wilderness.

Valora was an odd child who often denied invitations to play from friends (who sometimes mocked her), preferring to stay in her room playing with ‘dull’ dolls and learning about tailoring. Her father wanted Valora to spend more time outside, learning a ‘more lucrative and useful’ trade for when she would inherit the family business. Reaching adulthood, her parents then got the idea, in order to consolidate further business alliances, to marry Valora to another merchant family in Selenica (the Mendelavs) who owned several farms and caravans, mostly due to pressure from the Mendelavs themselves. Valora felt completely uneasy, unhappy, and troubled with this proposed marriage and so she fled Selenica. This was a shock to everyone who knew her family because they all thought Valora got well with the child of the Mendelavs family. Some speculate that there are other reasons behind this.

At the beginning of her exile some months ago, she stayed a few days with the druid Ciranne to clear her mind and decide what would she do next. She then travelled to different cities all along the Duke’s Road, with money and goods she stole from her family, until she realized she wanted to follow the family business, but outside Selenica, establishing eateries and apothecaries all over the known world and inventing the finest methods within her industry. Valora doesn’t want her past incident with her family to ruin her life, and so she became optimistic and cheerful once again. She already knows some of the trade, so she started exploring local eateries, the wilderness, and other things of interest. This small trek took her all the way to the city of Treshold in Karameikos. Here, she began to seek business opportunities. But unfortunately, she was scammed in this new city and now is thinking about moving again to distant lands, to see what they can offer to Valora’s purposes and dreams.

Most of the times, Valora is jovial, charismatic, with a good sense of humor and a larger-than-life attitude. Other times, though, she becomes silent, isolated, with a hint of sadness in her face.

Regarding her religious beliefs, she tends to favor Asterius and Odin, due to their relation with trade, merchants, travel, and living life to the fullest.

Valora learned all her magic from the druid Ciranne back in Selenica. Valora bases most of her spell-casting in drawing and pronouncing runes in the druidic language (which function as somatic and verbal component) as well as using material components common to sorcery and witchcraft. If she needs to performs divinations, then she does so by way of reading stars, palms, animal entrails, etc. Also, she knows the theory of how to use animal sacrifices and burning wicker men to perform magic, but she has never done it and hasn’t feel the need.

During her time working as a cooker for Beniamin Zugravescuon Threshold, Valora meet and became a friend of his daughter Rahela Zugravescu. When Camelia Dalca was capture by the bands of goblins of the Dread Horde she was the first to say " That looks like a K to me. " But nobody hear her.

On the date of Soladain the 28th of the month of Sviftmont of the year 1013 After the Coronation of the First Emperor of Thyatis, an unidentified bureaucrat of the Kingdom of Karameikos recruit a group of adventurers under the code name Cubs of the Wolf to pose as members of the Band of the Wolf during a series of secret missions. 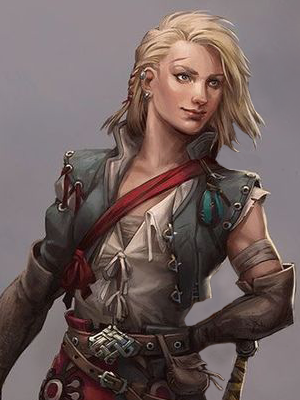