Sarabelle is an orphan and was raised in a clergy, and a strict one at that. At some point she began to believe that her religion is the true one, and everyone else is following the wrong path. So she set out with her teacher Priest Ruloc Phousus on a pilgrimage to convert others to her religion. She thinks that been a believer of the power of the Athena makes her an enlightened person in a world full of darkness. “Forward, my daughter, bring light into darkness.” She was raised in a Comfortable Social Class on the Kingdom of Karameikos and is a cleric of the Immortal Athena of the Church of Thyatis.

Her teacher Priest Ruloc Phousus, is trying to teach her: " We know not everything, nor are we the keepers of all the answers. We seek wisdom by experience, we seek knowledge in been humble. Athena will guide us. " Her teacher Ruloc was killed by an Aranea that posed as Valika Songcrafter.

After the events of Strange adventures in Highforge Sarabelle returned to Specularum to continue her clergy and was ultimately convinced in her training that without a code of Law there is only Chaos. Though she continued to spread the word of Athena aimlessly, now with a lawful perception, she still recalled the words of her teacher Ruloc Phousus in a daily basis.

At that time on [Highforge Town]] Sister Sarabelle crossed paths with another member of the Band of the Wolf, a young human who was studying the library of Silverlight Arcane Shop, he was later inquiring about a nearby shop of a dwarf of some reputation that goes by the name of Kardek Threehammers. Because he was a glantrian wizard and Sarabelle didn’t wanted to speak with him, she didn’t approached the young man. She saw it later buying a Rifflian’s fabric to craft a magical dark cloak.

On the date of Soladain the 28th of the month of Sviftmont of the year 1013 After the Coronation of the First Emperor of Thyatis, an unidentified bureaucrat of the Kingdom of Karameikos recruit a group of adventurers under the code name Cubs of the Wolf to pose as members of the Band of the Wolf during a series of secret missions.

Sarabelle keeps a personal journal where she writes her thoughts to purge away any i’ll opinion she might have. It’s her way to keep a strong clerical mind set towards Athena, Goddess of Wisdom. Sarabelle’s Book of Prayers 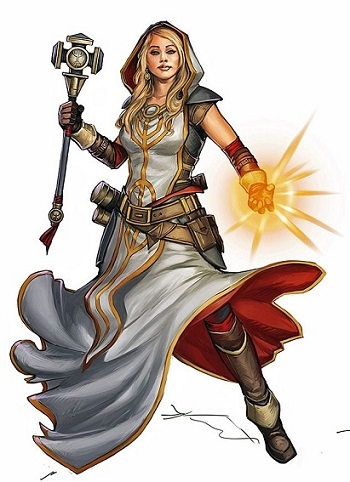