Hailing from the Kingdom of Rockhome farmlands, Orik Chivay, was always handy. One fateful day his family’s crops died, as if by a curse since they were all well taken care of. “Humans!” his father shouted “It must have been the damned humans always wanting to steal and sell their goods in our turf”. Orik always heard from his father how the humans kept sabotaging his family’s crops. He wasn’t sure whether it was true or not but his father believed so and so he learned to believe it too. Anger filled he ran looking for any culprits. He searched until he found himself deep in the wood where he found a small shrine. “Vecna?” he read “Yes!” the cultist replied “I see that it is power you seek, to rid your farm from the humans". “how did you?” Orik was quickly interrupted by the cultist “i know it because it is my job to know. If power you seek, then Vecna will surely help. as long as you are devoted to him he will make you powerful.” Orik enthusiastically agreed.
After Korgan taugh him how to worship Vecna properly he said " someone as enthusiatic as you might be able to find the artifacts haha" “artifacts?” Orik replied “nothing. its nothing you should know”. the following day as Orik went to seek his mentor the shrine was empty and Korgan was gone. a lone parchment with sybols he could not read. "artifacts " he thought to himself “surely Vecna will guide me” he said as he left rockhome in search of power and enlightment. 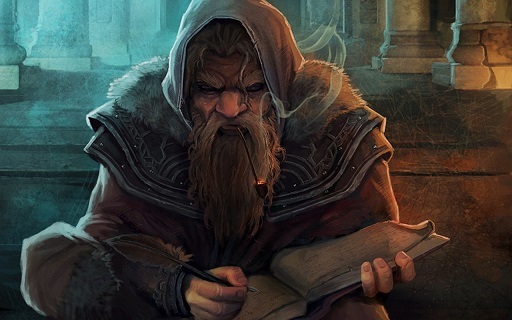