Physical Description:
Maiavel is a shadow elf, and as such, his skin is paler than that of the average high elf; his eyes are Gray. Maiavel’s hair is long and white, with some parts of it being styled in braids. He only has long hair on the right side, with the left side of his head being shaved and covered in elven tribal tattoos. Other tattoos include two straight lines under his right eye and a phrase in written in elven script under his left clavicle ( * See below). Maiavel wears hooded cloaks or hats during the day because his eyes (like most other Shadow elves’) are sensitive to sunlight and bright lights.

Background
“Our cities are prosperous, but not all of their citizens are. We had to work the mines since we were young. We worked… for years, we worked. It never seemed to be enough, sometimes we didn’t have enough money to eat at all. So, after some time my brother and I started sneaking around and taking whatever we needed. At first it was hard to steal, but after some time we got kind of used to it. I was tired of working and not being able to eat, tired of having to find shelter every night… tired of barely surviving instead of living. Did we ever get caught? Of course we did, and after a while it started getting us a pretty bad reputation.”
Maiavel’s brother Daero suggested that they leave the City of Lights on the land of the Shadow Elves to find a better life outside of the tunnels. Well… it couldn’t get much worse than what it was, and Maiavel did not want to bring many more problems to their family. It’s not like they had a reputation to maintain anyway, so they parted towards the South, surfacing in the Republic of Darokin and eventually reaching the Kingdom of Karameikos looking for anything that could change their fates.
“I dislike the sun. It bothers me, but I am not afraid of it… Much like how I feel about mingling with the above-ground races out there. Many shadow elves live in fear of the outside world, but I feel like we can become greater out there than we will ever be locked down here. It feels like many of the races, especially the other elves still hold a grudge against us [shadow elves], but I won’t let the wars of our ancestors ruin this opportunity for me, for they are not my own. As long as they don’t get in our way, I don’t care what they do.”
The shadow elf brothers are smart, but reckless. Maiavel is protective of his older brother, so part of why he agreed to leave Alfmyr was so that he could make sure Daero didn’t do anything too dangerous, without him. “Wouldn’t want him to have all the fun now, would I?”

*[The following is a common elven phrase that is tattooed under Maiavel’s left clavicle: “Avel niemel sikki mor hiedoso welsa, op avel inorum nekra.” Translates to: “A sword unseen is no less sharp than a sword held openly, or one in a sheath.” Meaning: Beware the unseen danger, and the danger that is present but kept in check.] –From: Races of the Wild. 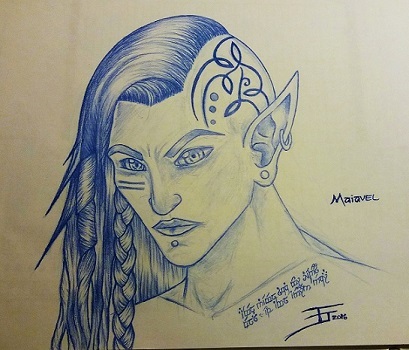