Con artist and seller of maps

" There is only one way I can feel good about myself, and that is helping others like yourself. ”

Benedetto claim to have been born on the Republic of Darokin’s Capital City as a member of a Wealth family who lost their titled to a rival feuding family who tricked them. Benedetto expends what is left of his family fortune helping others find their right path into grandness.

Benedetto has a scroll signed by General Troyus Machistes of the Thyatian Empire army, who gives him the mission to recruit individuals with variety of abilities and skills for a special unit of the CXXI Legion that is in this moment on the Isle of Dawn. A promise of great rewards and treasures will be awarded to the ones who join.

You have the opportunity for greatness, dear friend!

Who I am? You ask. And you should. My name is Benedetto Difusallo and I am your new best friend!

You think I have something up my sleave? Yes I have of course. And what I have here? A scroll signed by the hero of the Thyatian Empire’s army: General Troyus Machistes!. I am one of twelve heralds given the mission of recruiting individuals with variety of abilities and skills for a special unit of the CXXI Legion! SURELY you have heard of him and the CXXI Legion! At this moment on the Isle of Dawn, a land full of treasures and adventure, the CXXI Legion is fighting the good fight against the vile enemies of the Alphatian Empire.

A promise of great rewards and treasures will be awarded to the ones who join the CXXI Legion. General Troyus Machistes reputation is in play! AND mine, too! I couldn’t lie to you, dear friend, here are the papers, the signatures and the royal seal of the Emperor of Thyatis, Thincol Torion the Brave.

My work is to scout and recruit people who are brave – and you my friend, you are REALLY brave – to join the Thyatian army as a special mercenary with a special HIGHER pay grade.

After that I help them move to the Isle of Dawn via a warship of the Thyatian Navy. At this moment I’m rounding up the chosen ones in the town of Threshold located in the Kingdom of Karameikos. You know, King Stefan Karameikos is a friend of mine and an ally of Thyatis, he is helping his old time friend General Machistes and the thyatian navy ships pay no taxes on his port. What a good man!

So, I only need to collect a small travel fee to cover some expenses, to check with the local government that your travelling papers are on order, etc. Just the usual. There you go. We will meet again in Threshold, my dear, dear, DEAR, friend!

A group of adventurers find themselves in the city of Threshold, tricked by a con artist with forged papers named Benedetto Difusallo and present a complaint to the government of the Kingdom of Karameikos through the bureaucrat Lardos Grobaras. Not wanting to wait for Justice to find Benedetto, the join forces to find him. they didn’t find him, as he has skipped town leaving Duh Torpeson posing as him on an inn. Later that evening, Aleena Halaran, paladin and defender of Threshold and niece of Baron Sherlane Halaran hires them to dispatch a gang of goblins that are south of the city. This group later join forces and call themselves the Band of the Wolf.

Duh Torpeson is interrogated by Raizak Derek who used Charm Person and Fox Cunning on him: “ Difusallo always treats me bad. He is a greedy, son of a whore. He has done business with a man Paulo Constente in the past, but is possible that he has a debt with Paulo. He also knew a man in Specularum that goes by the name of Sharton Ses-Tril. “

For all the people that are asking about Benedetto Difusalo: “Rumors are that he left Karameikos because is to hot for him. A group of adventurers reported a scam made by him on Threshold and the government has issue a warrant for his arrest. He could be in Darokin, but that information is unconfirmed…”

The Band of the Wolf discovered that Benedetto was not from Darokin and was really from Ierendi. He was found to be the owner of Benno Treasure Maps.

The Band of the Wolf deliver their two prisoners Xaphira and Benedetto Difusallo to the authorities of the Thyatian Empire on the city of Waping Piao on Ochalea.

Benedetto Difusallo is transfered from the prison located on the Waping Piao Military Quarters to [Thyatis City to be judged and condenned on charges of forgery of military documents, fraud, disrepresentation of government officials, and theft, among others. 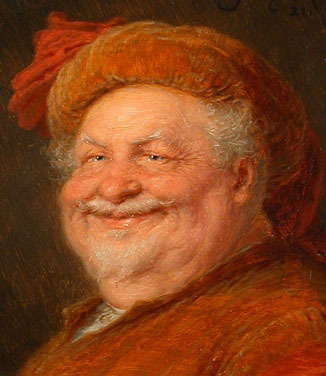