The Battle of Perfection

The Battle of Perfection
8008xp
Time:
Mystara Calendar
Finished on: Day 468 on Taramis

Introduction:
The armies of the Taramis Alliance are getting closer to the hole in the middle of the Golden City of Kaziar were the Temple of Perfection once was. Over the marching armies, the The Thunder Wolf is docked on the flying city of Serraine, loading the Wolves of the Band and the last supplies. There is sole statement spoken by the The Preserver among the silence and anxiety of those who wait piercing the hole in top of the city with magical objects and far-seen devices: “ Here they come. “ he whispers and everyone hears him.

Soldiers of different armies, humanoid armies, start climbing out and running out of the hole running toward the Taramis Alliance Armies. “ Where do those three armies come from? They don’t look like The Golden Army of Taramis. “

“ That’s impossible, both Azcans and Nithians were extinct millennia ago! “ answers Aranhil “ They are only in story books. “

“ It’s much more complex to explain, but let’s just know that I, The Preserver, not only saved lives of this apocalypse but of all apocalypses. I have been storing extinct races on a world within our world, a Hollow World. “ explains the Immortal Preserver. “ I can only assume that The One Immortal discovered the Hollow World and conquered it. “

“ So the Seventh World War was just a ruse to dig underground and conquer this Hollow World. “ answered Haldemar of Haaken “ We were all fooled. “

The first tower emerge: The Tangerine Tower with a Nagpa Obelisk in top. Then The Golden Tower and then the Coral Tower.

“ What are those crystal objects that are installed as siege weapons? “ asks Cornelia

“ They are Metamagic Canons, “ Ar “ a deadly invention of the Old Alphatian Empire. He must have fixed the last one located on the The Ziggurat of Faith and duplicated them. “ 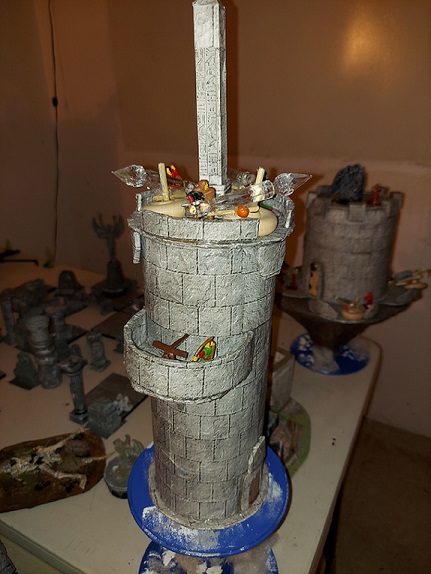 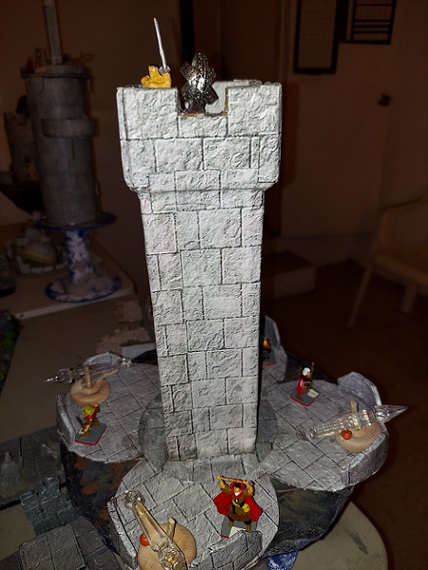 Then the Temple of Perfection starts to emerge in the back of the Devastation Beetle ….

Synopsis:
The Preserver pushed gently the side of The Thunder Wolf and every plank, rope and nail of the airship vibrated before disappearing and relocating in front of the Temple of Perfection just out of reach of the gigantic Devastation Beetle.
" Every one of us knows what needs to be done! Forward! For Taramis!!!!! " shouted Cornelia at the helm " Release the Tarrasque !!!! " she ordered the awakened Dire Wolves who pulled and release the chains that held the beast underneath the airship.

Group A: Composed of flying Axetor, Flint and Troyus, engaged the Devastation Beetle followed by a rampaging Tarrasque securely charmed by Raizak. With all the preparation they have, the unusual happened when the slow gigantic beetle started moving so fast it could attack its four opponents. " It’s some kind of swift attack like a special version of a Timestop spell " answers Raizak to the group using the Telephatic Bond they are sharing
" Let’s do something crazy! Let’s enter! " start shouting to each other Axetor and Troyus. Flint continues hit by hit piercing the armor of the Beetle. " Go!! "

Group B: Composed of Dio, Raizak, Yoshirou and Merkel mounting Poyo and leading his Purple Worm. The first tower to move toward them to protect the Temple of Perfection was the Golden Tower. The group was prepared with True Seen spells and discover the powerful ilusions the tower was using against them. " It’s our chance to disable it before they discover we can pierce the veil of their illusions. Everyone! "
There is a real Golden Tower and a false Golden Tower shouting Weird spells at them and using the Metamagic Cannons. The group moves fast enough and the Purplue Worm rips one of the Metamagic Cannons from the tower as Poyo does the same to another cannon.

Group C: Composed of Captain Cornelia’s crew, the Wolves of the Band and Aranhl with Carceran were in charge of keeping the Thunder Wolf afloat, shooting at the enemy and serving as a general support to the two main attacks.
Keeping their attacks divided between the Palace of Perfection and the Magical Towers, taking damage from both sides but attacking both flanks with their ballistas armed with acidic and fire bolts. Aranhil and Carceran use their powers to protect the most valuable weapons and keep the ship moving in the middle of the chaos.

The Brain Vault:
Accessed through the mouth there’s a special dimensional door, a secret chamber waited inside the head of the Devastation Vermin. There The One Immortal ruled his palace and controlled his monster directly. He was using a more powerful epic version of timestop to allow the beetle to attack many targets. At the same time commanding his troops.
A thick crystal jar filled with strange alchemical liquids was in front center. There was a mirror, an old Boldavian organ, a Nithian Empire tablet with the power of Beetles, Two Nagpa Obeliscs one in each side of the door, and the Arcane Order Focus Stone. Magic circles with epic spells been casted will draw themselves on the floor or walls and then disappear after changing color or casting weird music.

Kaziar had everything he needed, but now that the Band of the Wolf was there he wanted to consume all of them. Using the Telephatic bond they were sharing he pulled all members into the Brain Vault. " You have completed all the steps needed to fix the world. This is the moment you take my place and go to the past, fix everything on your image and make this a better, worthy world. "
" Why will we do that? " answers Raizak
" Because the change I made to history with the Obelisk of The Word was that this world should be known and remembered by everyone as Taramis… "
" And how it was known before that? "
" Mystara. " he laughs " You see, this is the broken future of your world, our world, if you take what I did, and make it better, you can turn Mystara into a paradise. Now we have the energy to do it. "

Another glass jail lights up and The Preserver can be see there in chains. He tries to say something but no words come from his mouth, Youshiru reads his lips " So powerful are them: A power not to trust. "

" That was the riddle The Preserver gave us before. The riddle was related to this encounter with Kaizar. "

" So powerful are them: A power not to trust.
One can penetrate faster than the straightest arrow to the center of a heart.
The stroke of a blade can be stop at the last very moment by one.
Weakens the strongest of bonds between two with only one though.
Escapes the clarity of certainly and clouds the trusted of words.
The smaller one is hated by faith and one of twelve frees the guilty.
So powerful are them: He will use one on you. "

As the Band of the Wolf move forward to attack the Brain in a Jar their movements start to become more and more slow. They realize that they are inside not only the brain of the Beetle, but that space was shared by the life force of the Beetle’s spirit and Kaziar’s life force. As the beetle’s spirit attacked them with devastation bites, they followed their instinct and attacked the villain with a weapon must damaging than steel or magic: Metaphor .

" Use words to damage him, use ideas, concepts, metaphors…. Win in his own mind! "

Their expressions were not just words. They were full of emotion, feelings, and memories. They were full of growth and empathy. Everything Kaziar couldn’t grasp.
They were like swords, and arrows. Like magic and fists, all hitting at the same time. The force of their eloquence was too much for the cristal jar that contained the Brain. With each word of truth it cracked until it couldn’t stand no more.
Kaziar was finished.

The Reconstruction:
After the defeat of Kaziar, the Allied Armies are able to push back the Royal Armies and capture the Palace of Perfection . Once The Preserver is freed and he uses his powers to re-join himself and the other immortals at the secret city of Pandius located on one of the moons of Mystara.
" The world of Taramis must be rebuilt before re-locating it on the original dimension it was taken for. "
" I want to help in that reconstruction process. " said Raizak as he looks back to his partners and they agree. " And many of my friends want to help too. "
" I have to part ways, my friends, I do need to go back to my family in the Alphatian Empire. I am not staying. " explains Flint with a tear rolling
" Maybe you can be so kind as to take a letter to my family? " asks Yoshirou
" And mine? " asks Troyus as some of the others agree.
" It will be my greatest honor. " answers Flints

A few days later Flint checks his pack with the letters and some gems as he enters the interdimensional vortex opened by The Preserver. He looks back at his friend for the last time. As he steps forward into the multicolor tunnel, he doesn’t know were he will emerge on Mystara, but he sure knows he has an amazing story to tell.

Extra:
NOTE: Fell free to add comments to this Adventure Log Entry with information about the adventure from the point of view of your character. Each log that helps document the adventure receives a 25xp award.

To the reader: Additional material describing this adventure could be found in the individual logs of some characters: Adventures.

Preamble to the Battle of Perfection